such as Rapid Prototyping with an awareness and appreciation for traditional techniques, creating bespoke cars for the most discerning of car enthusiasts.

When Andy Mitchell of Mitchell Motors commissioned 3D Engineers to develop a unique 1950’s inspired sports car, 3D Engineers knew they were creating the stuff of dreams. A lover of fast cars, Mitchell had built up a strong desire to have something truly unique, something that would satisfy both his love of racing while matching his very specific views on what makes a good looking vehicle ( Mitchell’s view on this were clear, so much so that he provided Stuart Brown from 3D Engineers 100 photos of cars, 50 of which he liked and 50 which he didn’t).

Selective Laser Sintering  scale model of Mitchell Special Mark II With the engine sourced from Bristol and the chassis built, Brown set to work on the basic design. Once a basic shape had been decided upon, Brown and Mitchell worked together to fine-tune design (final alterations included 1-5mm tweaks to the overall design). Using Solid Works and Photo View 360 design candidates were rendered up for Mitchells approval.

Three months from their first meeting, and some 21 designs later, Stuart Brown was ready to present his client with the final designs. To ensure the final product would match expectations, Brown turned to Rapid Prototyping to produce a tenth scale model. The 3D model, produced by Laser Prototypes was printed using a Selective Laser Sintering machine with the final model printed and dispatched within 2-3 days.

Using the Selective Laser Sintering process it was possible for 3D Engineers to present their client with a highly accurate scale model. With the scale model approved 3D Engineers were able to progress to the next stage of product development, the creation of a buck, confident that his client had a clear understanding of the final design.

Finally Mitchell and his team hand fashioned the body of the car, and within seven short months from receipt of the project brief, the Mitchell Special Mark II was competing in vintage car competitions. 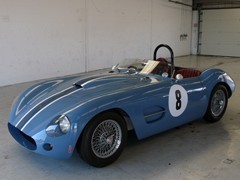