Lady Gaga’s recent tribute performance to David Bowie at the Grammy Awards this week used local Belfast 3D printing services as well as a host of computer graphics, interactive videos and robotics to amaze an audience throughout a packed six minute set.

Lady Gaga wanted to use the very latest technology to be able to push the boundaries and express herself in a manner never previously achieved.

In order to put together such a ground-breaking display within just weeks of the rock stars death, she turned to 3D printing at LPE in Belfast.

Bespoke rings were created which were to give her magical powers onstage. The rings allowed her to have real time control of the stage, an LED wall, and a three dimensional hologram of Bowie himself.

Designs for the rings were completed at XO Studio in London and once the files were received, LPE’s team quickly produced the parts overnight in layers of 0 .1mm on their hi accuracy Viper SLA printer.

“Having already worked extensively on previous Lady Gaga costume effects, props for Game of Thrones, X Men and even Mrs Browns Boys Da Movie, we knew what we had to do to offer a high quality, fast service required to meet the tight deadline required for the recent Grammy Awards show.” – Campbell Evans Sales Director at LPE

The rings were hand finished and painted to a rose gold and opal clear finish by the experienced in house team at LPE and delivered, all within just a few days, allowing a team of engineers to quickly incorporate some very clever Intel graphics technology, which actually responded to the ring, and how Lady Gaga moved on stage.

In a statement issued seconds after Gaga’s performance, the pop star spoke about bridging music and technology at the Grammys. “I like to do things that integrate technology and art with powerful experiences,” 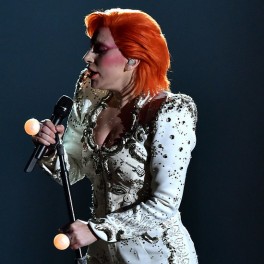