The Delorean car, made at LPE, has just won second prize in the technical competition in advanced finishing at the additive manufacturing users group (AMUG) conference in Chicago. Beating of competition from all over the world, LPE were delighted that their model Delorean, which showcased the very best of the finishing services on offer at LPE, impressed the judges at AMUG.

2016 saw LPE celebrate our 25th Anniversary as an additive manufacturing service provider. To mark this momentous milestone and showcase our many services and finishing skills we decided to create our own special centrepiece model. It was for this reason, that the team at LPE came up with the idea of re-creating the iconic Delorean time machine car from the Back to the Future films. Like ourselves, the Delorean was originally made in Belfast and in fact was itself celebrating the 25th anniversary of its production. A concept model, based on the Delorean, represents many of the industries that we serve including, the manufacturing, automotive and film and animation industries. Further, the level of detail associated with this model meant that the team had an opportunity to showcase a wide variety of their finishing and model making skills.

Much creative design work was required to put together the CAD for this model in a way that would allow us to integrate the use of so many different technologies to produce the various components of the car. We used our extensive experience to help us choose the most appropriate manufacturing method for each separate component of the car. The large build envelope of our SLA machine was utilised to build the car in as big a size as possible (approximately 700mm long which is about 1/7scale).

We applied many different innovative finishing techniques, which we use every day in-house, to transform the printed parts into a highly finished assembled model. This project allowed LPE to showcase a number of finishing techniques including, polishing clear watershed SLA components, polishing and buffing up DMLS printed metallic components, painting finishes involving the addition of metallic pearlescent flakes and the application of faded tints.

Everyone at LPE is very proud of our Delorean centrepiece model. The team worked together and used the very best of their craftsmanship and model making skills to create a part which exhibits intricate part finishing, multiple part finishes and the integration of electrics. We feel that the quality of the finishing in this project, the attention paid to replicate exact detail from the original car and also the integration of lighting and props allowed LPE to produce a top quality project that captures the original enchantment that doc’s famous car created in the block buster film – and it seems that the judges at AMUG agreed!

“The AMUG conference brings together engineers, designers managers and educators from around the world to share expertise, practices, challenges and application developments in additive manufacturing. The competition included many Fotune 100 companies like Caterpillar, Du Pont and BMW, it is tremendous accolade to our companies engineering skills that we beat of so many world leading companies to come second. We had two offers to buy the car, one of $20,000, but unfortunately it is not for sale ”, Patrick Walls, Engineering Director 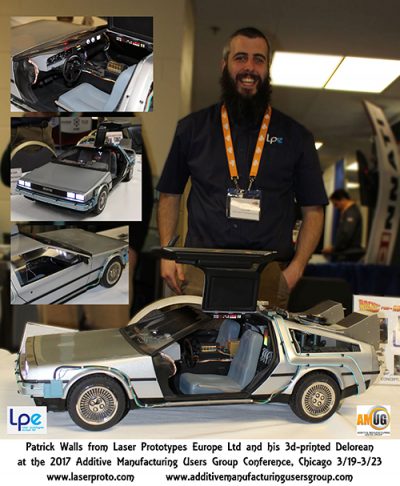